The downtowns of most major American cities were a great investment, even for those who bought in the real estate crisis a decade ago — and the premium gap between city centers and their suburbs continues to widen, a new survey of urban real estate finds. The only question is: Who can afford it?

In Philadelphia, Boston and Manhattan, home-hunters need to pay a premium of well over $300,000 to live in the heart of the city, according to Property Shark, a unit of Yardi, the global property management and services company. Its study, which examined the median sale prices of homes in 34 major U.S. cities between 2008 to 2018, found the price appreciation coincided with a many cities’ population booms and growing household incomes.

The West Coast is the only region where downtowns haven’t kept pace with outlying areas, thanks to a huge runup in home prices across the board.

“California simply has a higher number of large cities compared to other states,” added report author Eliza Theiss, “and each city has its own specific reasons why a downtown will be a hotspot, or an area that will not be able to compete.”

For example, despite being a tech center, San Jose’s downtown doesn’t have the potential to compete for home-hunters with nearby Mountain View, Palo Alto or Cupertino. Likewise San Diego, despite its oceanside location, loses out to neighboring La Jolla and Torrey Pines, she said.

In recent years, some downtowns have benefited from tax breaks and redevelopment that has lured young professionals back to the cities, creating the “cultural shift” that has made them so expensive, Theiss said. Among the new amenities are sports stadiums, convention centers, “green” recreational belts, food festivals and parades. New public and private transportation options make it unnecessary to own and garage a car, eliminating a major expense for city residents.

Workers are also flocking to the cities for jobs. “Sacramento is a great example of how a downtown can be revived and turned into an economic engine and an attractive place to live and work,” she said of the California state capital, which is an exception to the report’s West Coast rule.

The dark side of the rising prices, of course, is gentrification. “There’s no going around it,” said Theiss. “With downtowns becoming trendy, the white flight of decades past has reversed, with higher income residents displacing long-term working-class and low-income residents, in some cases displacing existing communities.”

But as downtowns price themselves out of reach, young professionals may migrate into other areas, spreading gentrification to other city neighborhoods, although that’s not always a sure thing. “The process of gentrification doesn’t always spread from one neighborhood to one that borders it,” she said. “If there are already well-established neighborhoods where home prices are quite high. it’s not an option. If the downtown is bordered by a more neglected area that’s mostly commercial space, then there is a lot of potential.”

Another issue is employment trends, with some tech companies opening satellite offices outside of pricy downtown centers. Amazon’s decision to open a new headquarters in Long Island City, New York, could bump up prices there, for example.

Even so, city lawmakers and planners may push back. “Many downtowns don’t have the necessary space or willingness to accommodate them,” said Theiss, “and not everyone is excited about seeing their downtowns change so much.”

One thing is clear. While there are exceptions, buying a downtown home of any kind is generally a moneymaker. Chicago may have its issues, but it was the city with the the largest difference between the downtown and the rest of the city, closing 2018 with a $675,000 premium. 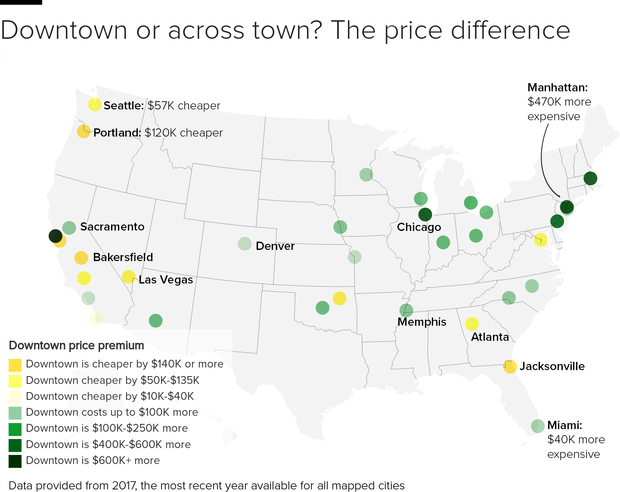